Since our establishment in 1998, the Silver Spring Historical Society has acquired many unusual artifacts that document the history of our community.  The 1946 mahogany Ladies and Men's bathroom doors from Tastee Diner?  We have them.  A 1938 art deco-designed lobby door from the Silver Theatre?  We have it.  A 1946 industrial metal and glass door from the Canada Dry Bottling Plant?  We have it.

And yes, we have more than just doors.

These items and many more have long been in storage and thus unavailable for viewing by the public. Several years ago an offer was extended to place the artifacts on long-term loan for display in the new Silver Spring Library but nothing came of it. Over the past few years our board has been diligently working on securing a headquarters space of our own and that goal may actually come to fruition but will require SEVERAL more years before it actually happens.

Recently the SSHS has been offered yet another artifact which, even though we currently have no idea where it can be stored, we HAVE to accept it; a 24' long x 6' (at the widest) HO scale model train layout that reproduces in amazing detail how Silver Spring's Georgia Avenue looked in the 1940s!

The first time I saw this layout was in 2003 when the owner, who lives in neighboring Frederick County, invited me to his home.  I was stunned as to not only the overall size of it, but the historical accuracy of many of the structures.  Its creator spent over a decade constructing it and reproduced in detail many of the buildings that he knew from growing up in downtown Silver Spring in the 1940s.

But enough talk.  Let me take you on a visual tour of the model train layout. 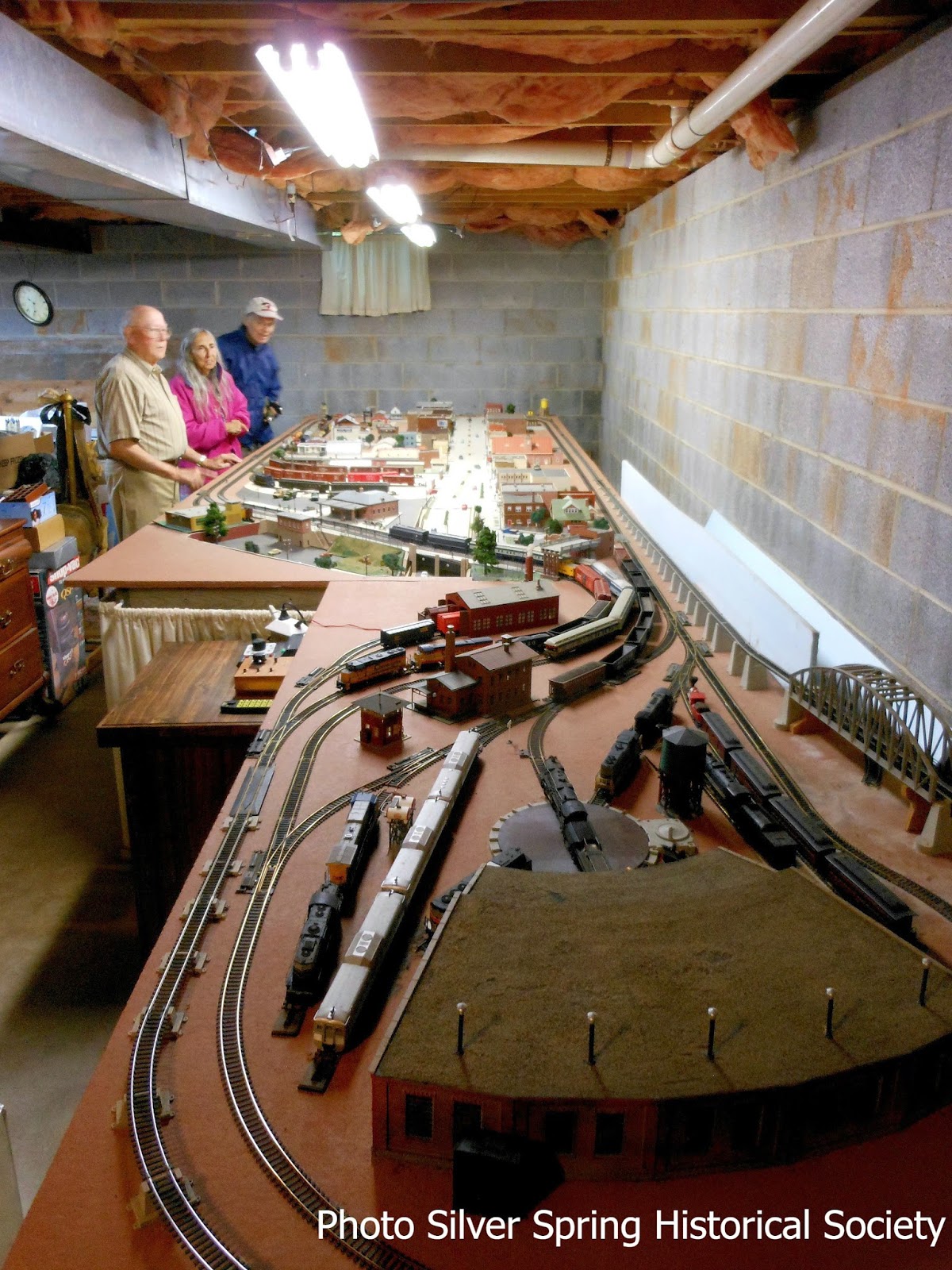 While the roundhouse/train yard in the foreground does not recreate structures that ever existed (its purpose simply is to allow the model trains to turn around), once the trains cross the Georgia Avenue underpass recognizable structures commence. 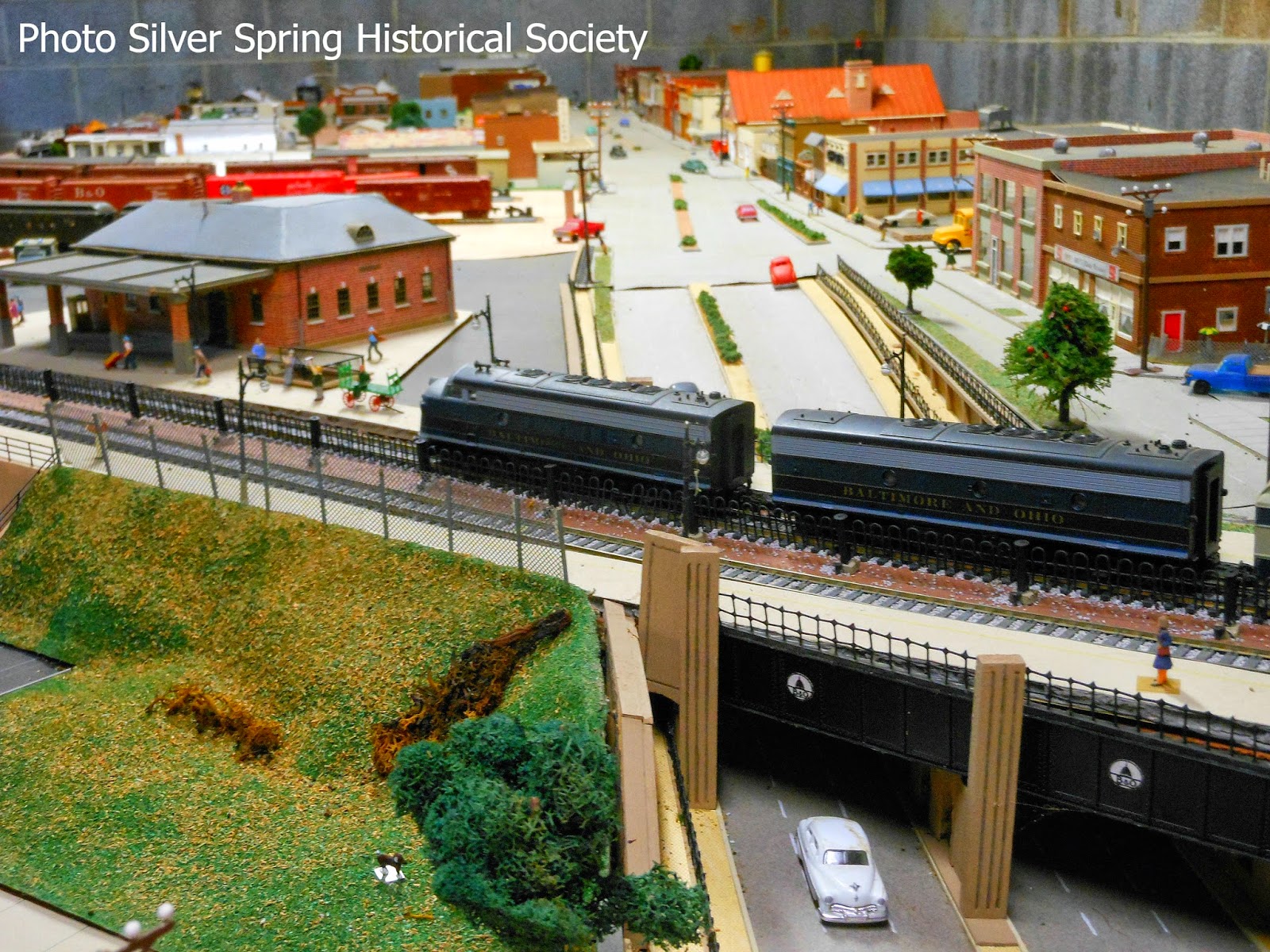 View looking north up Georgia Avenue from the south side of the underpass. 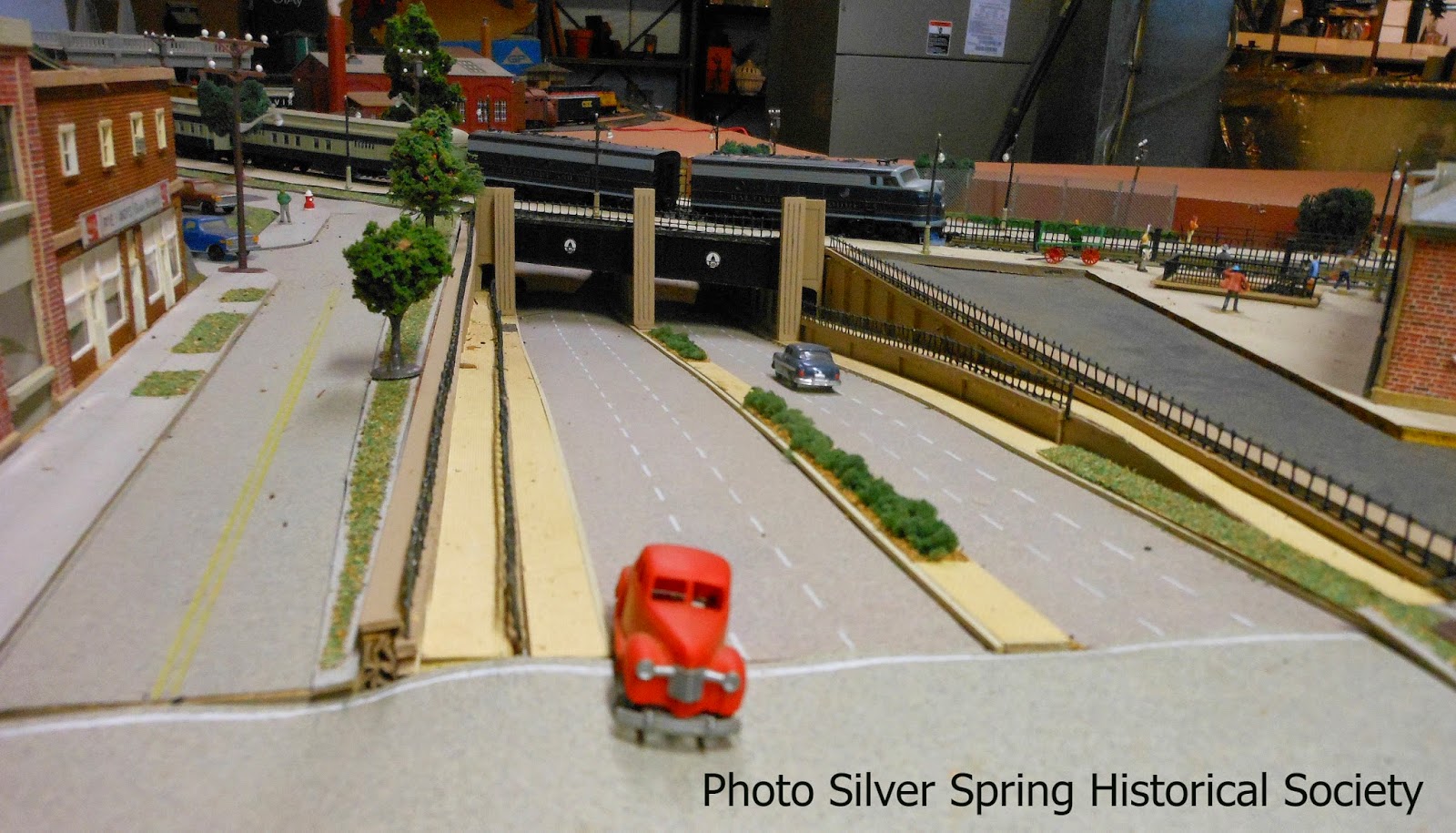 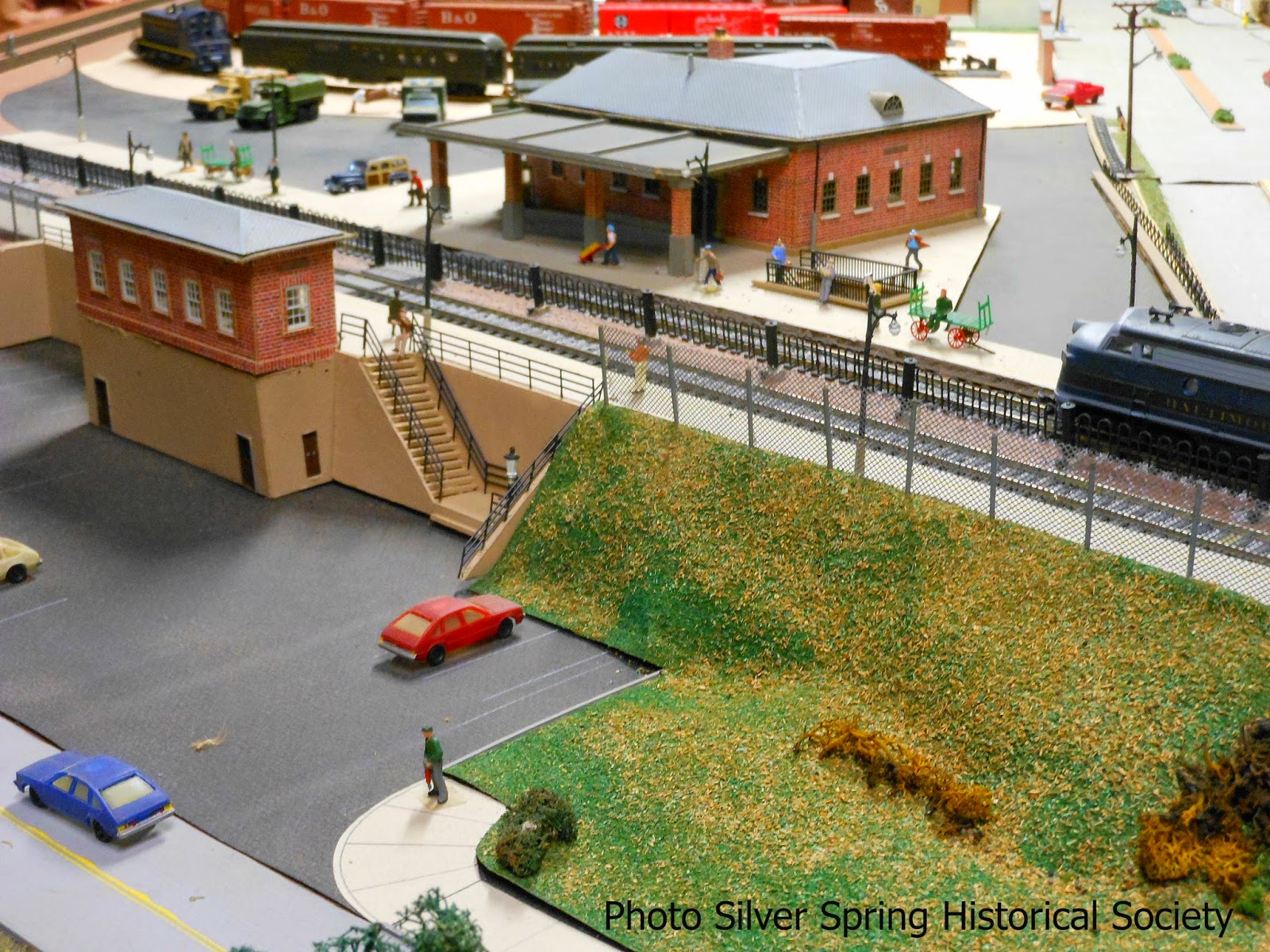 An incredible amount of detail was put into the creation of Silver Spring's 1945 Baltimore & Ohio Railroad passenger station (8100 Georgia Avenue) including its demolished east bound station and the extant pedestrian tunnel that connected the two structures. 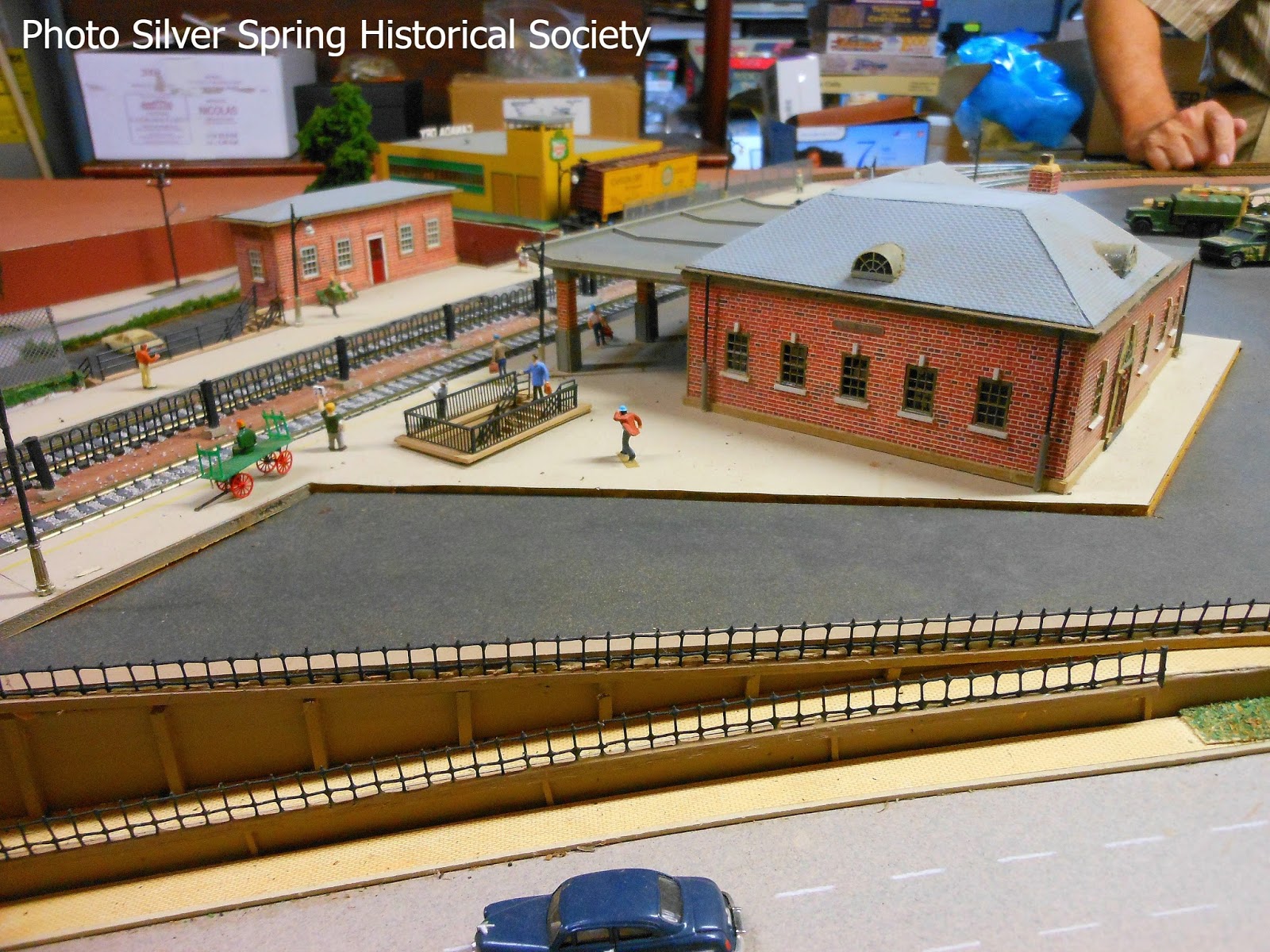 South elevation of the station as viewed from Georgia Avenue. 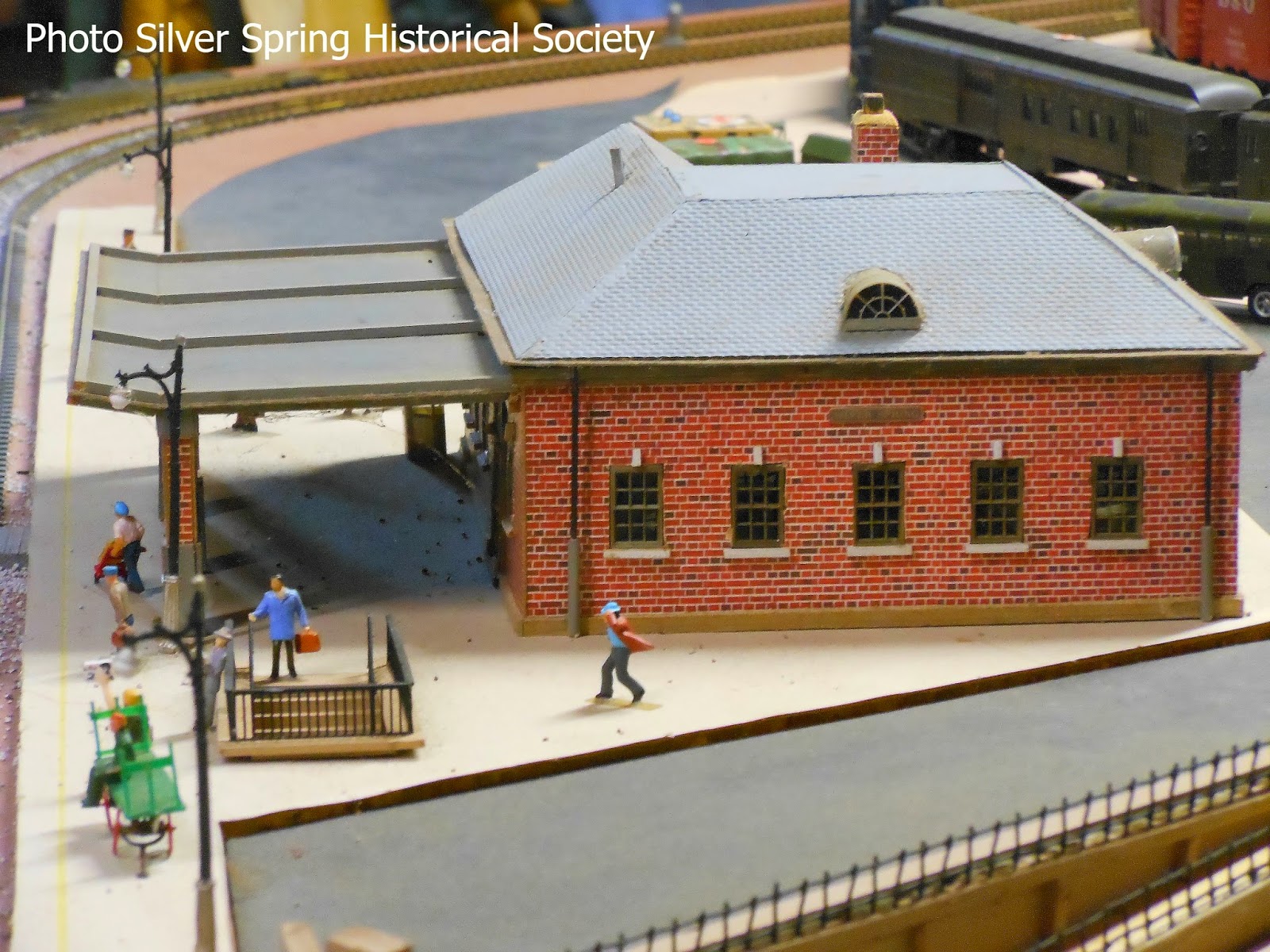 Running to catch his train! 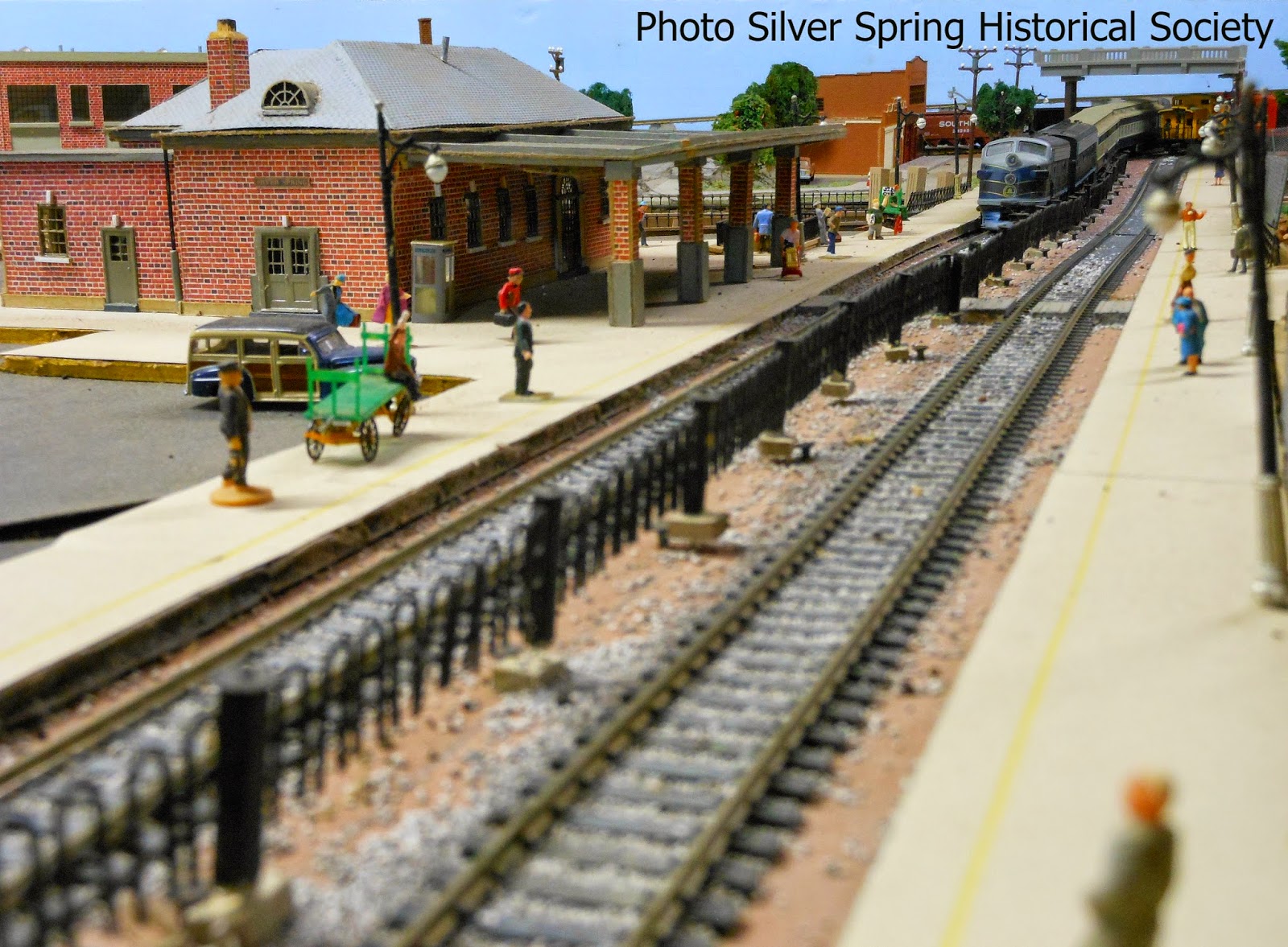 Train is arriving at the platform! 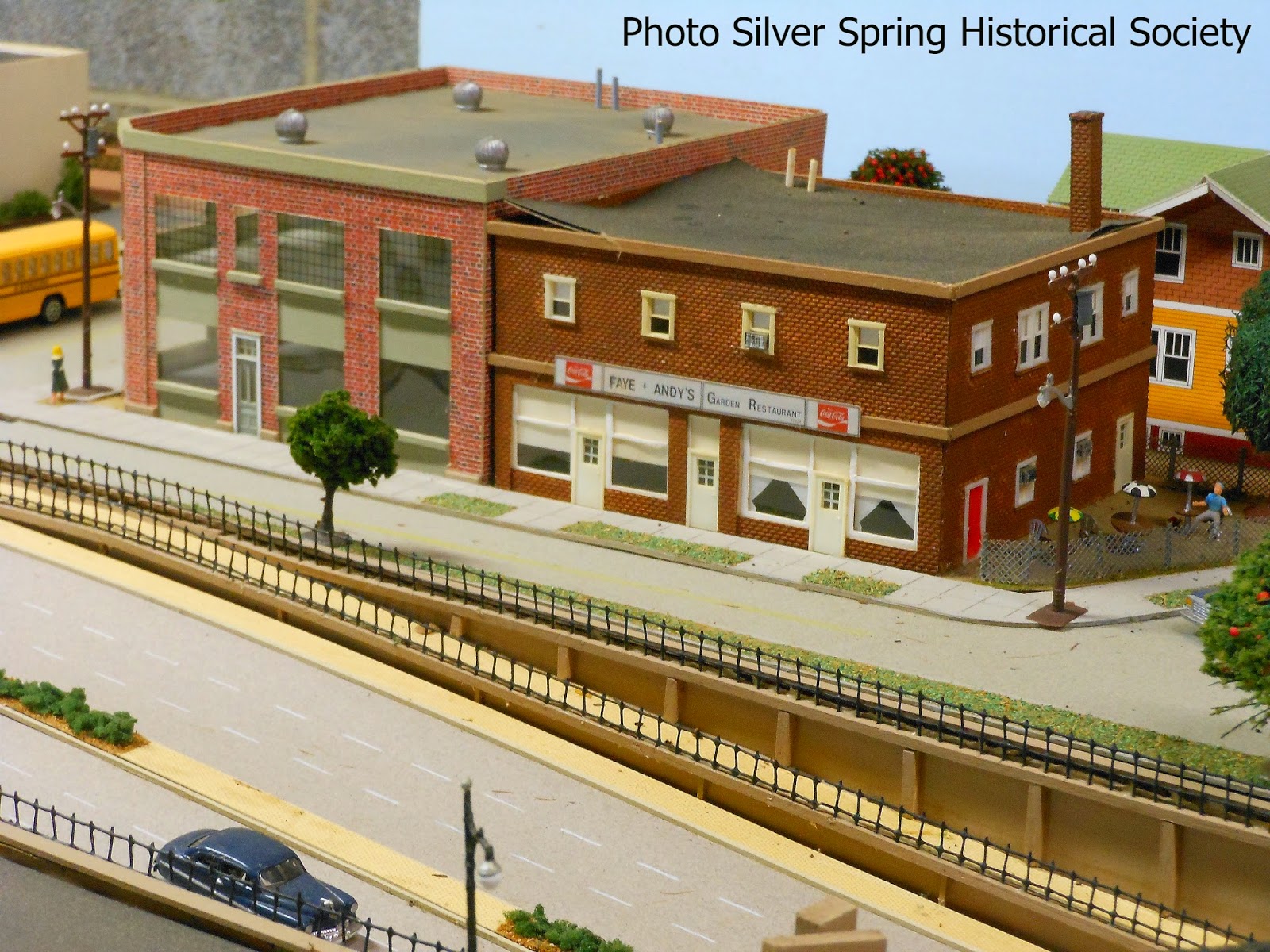 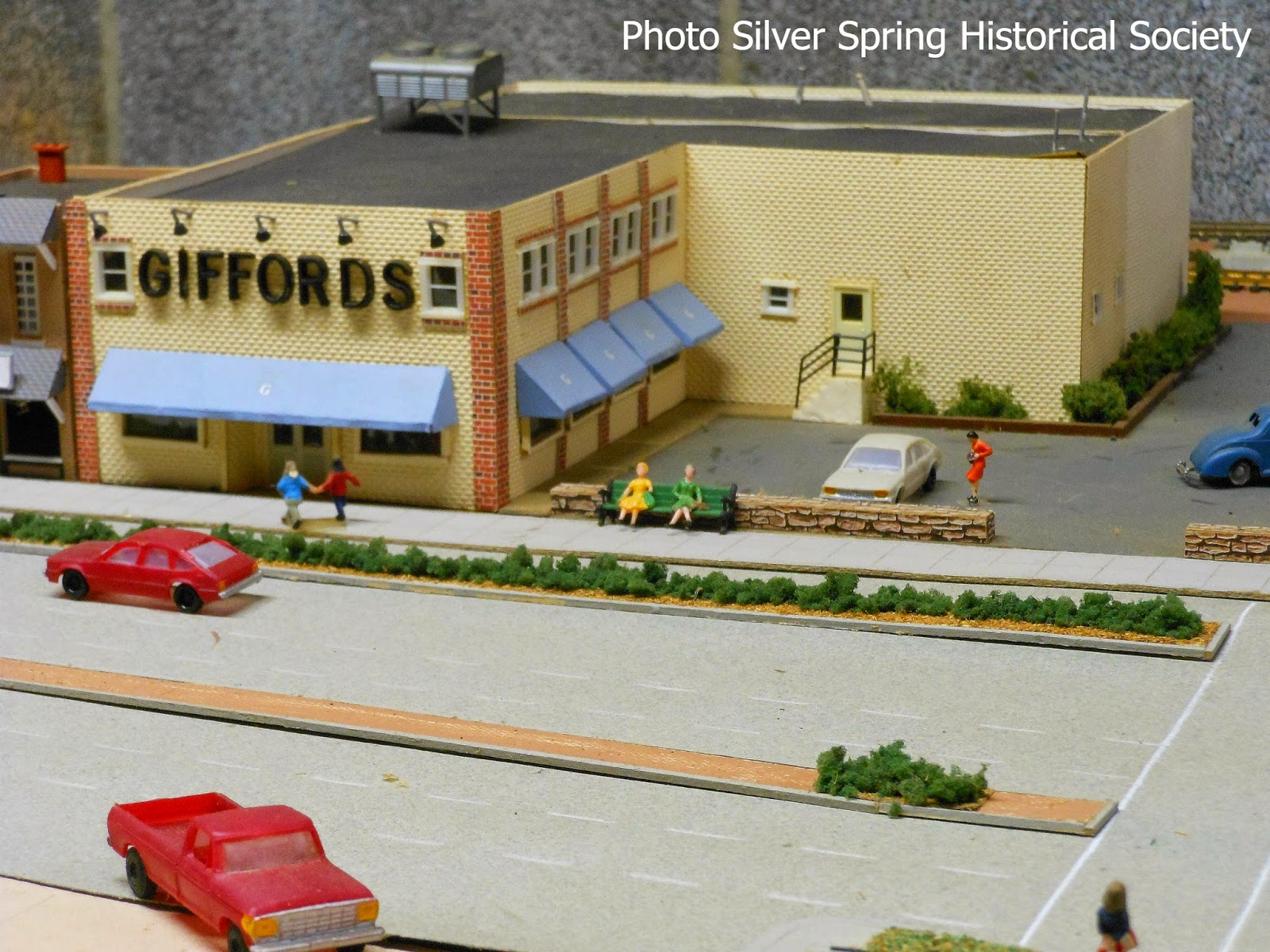 On the northeast corner of Georgia and Sligo is the legendary Gifford's Ice Cream (today Quality Time Early Learning, 8101 Georgia).  The depicted stone retaining wall is extant and wraps around the corner. 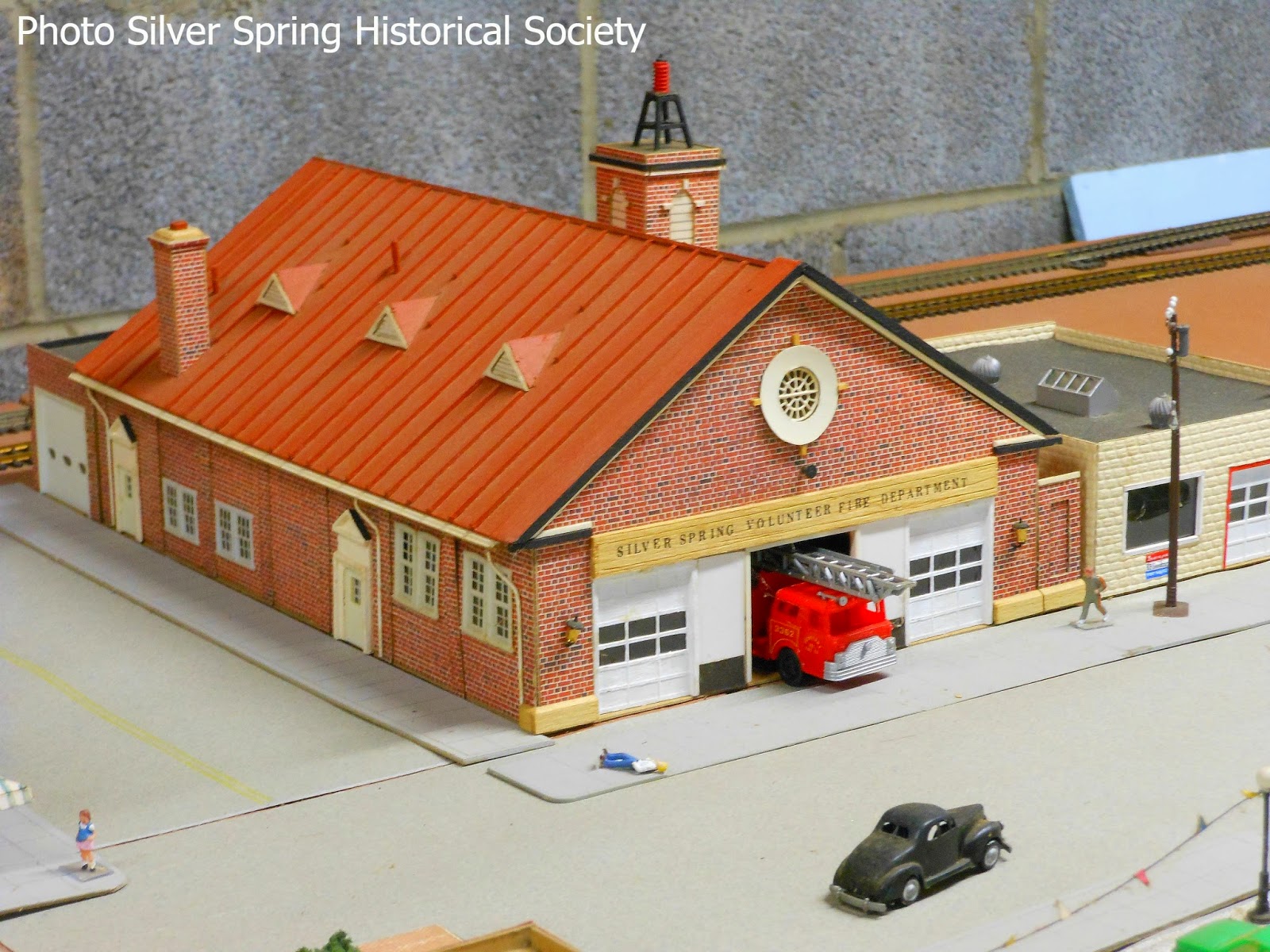 At the opposite end of the block from Gifford's is the 1915 Silver Spring Volunteer Fire Department (today Fire Station 1 Restaurant & Brewing Co., 8131 Georgia).  The detail of this building is particularly stunning. 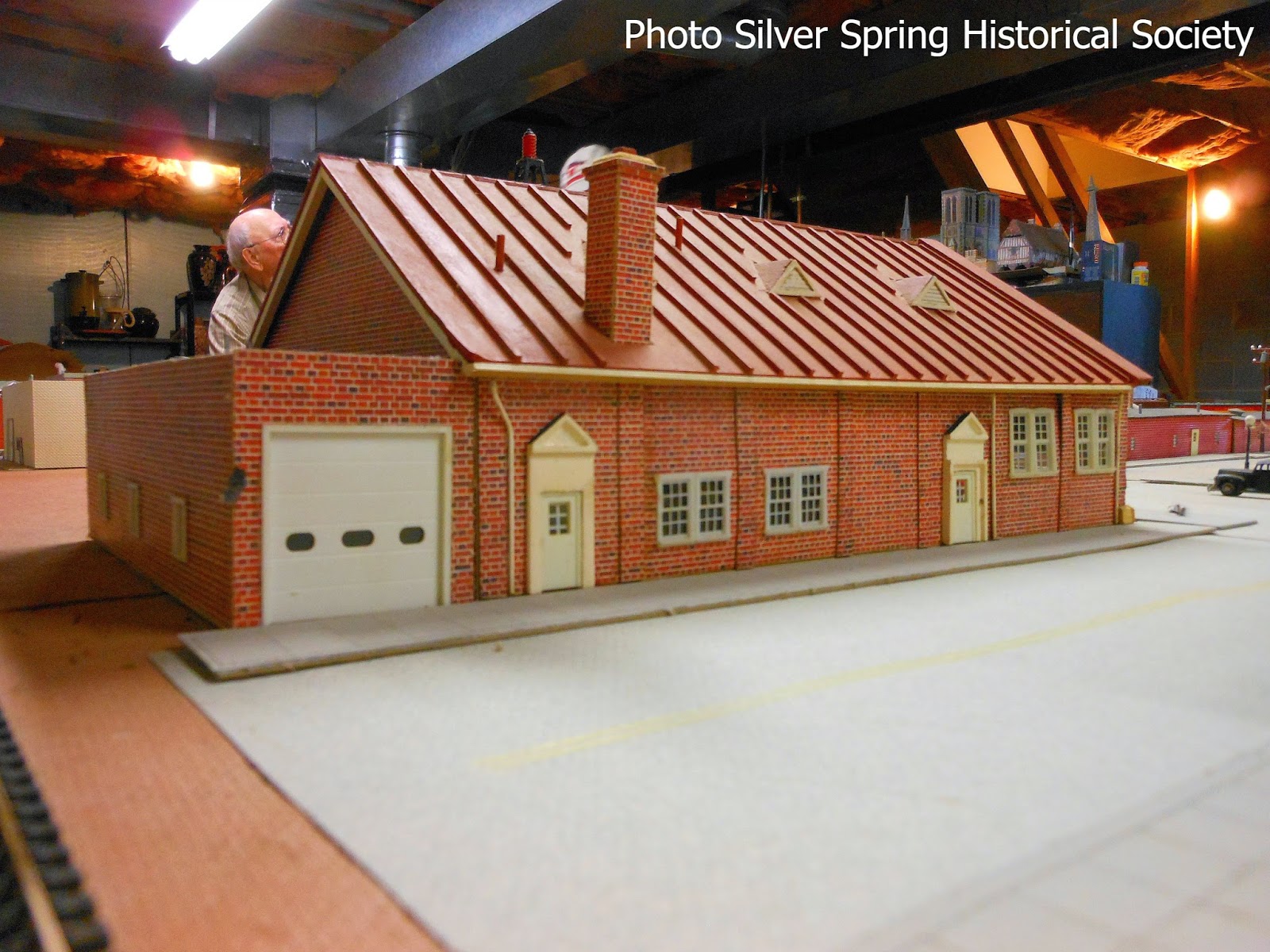 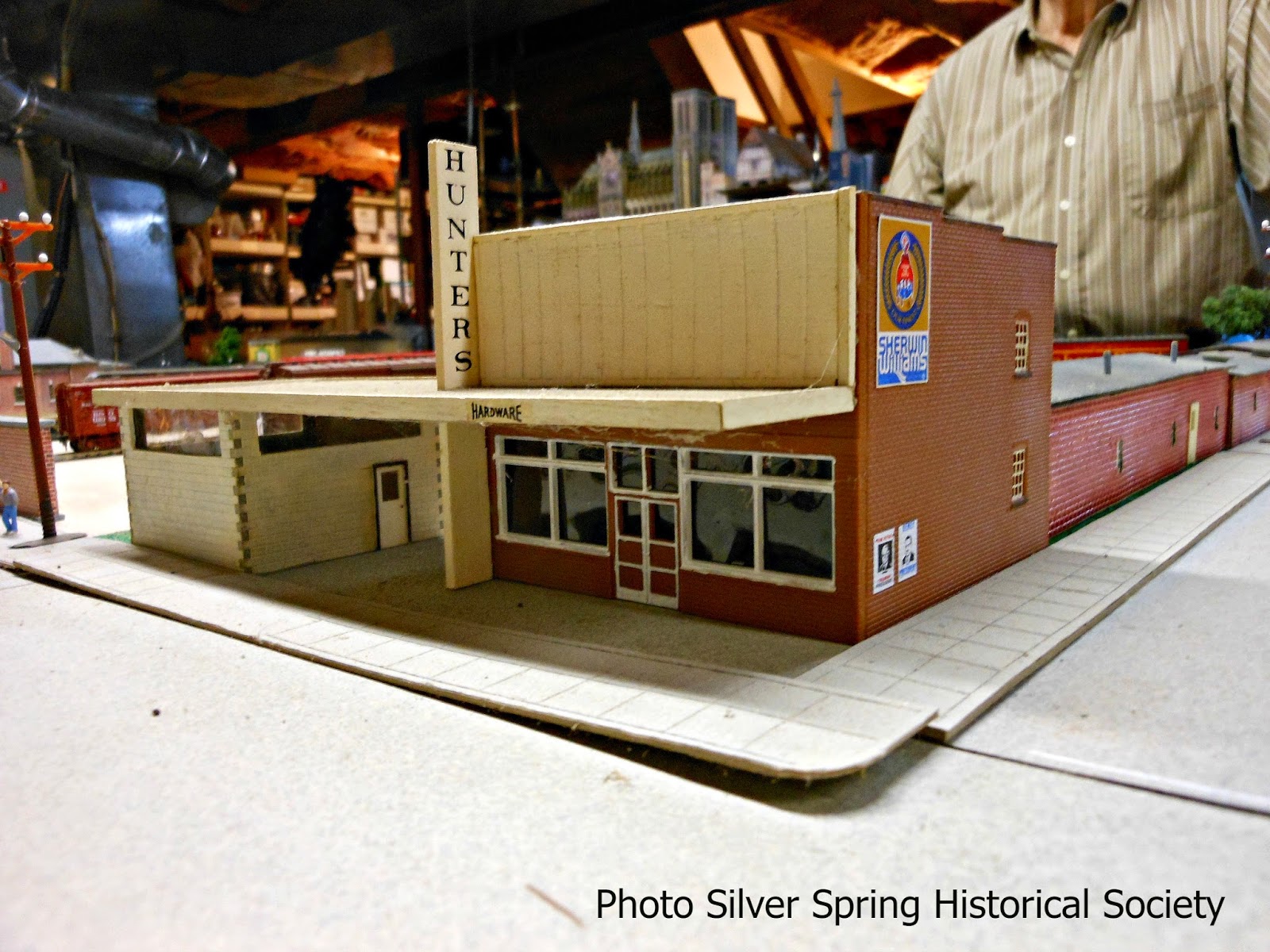 Crossing Georgia Avenue again, we stand in front of the 1925 Hunter's Hardware, whose facade was remodeled in 1949 (today Dor-ne Corset Shoppe, 8126 Georgia, "From hardware to underwear" as I point out on my walking tour). 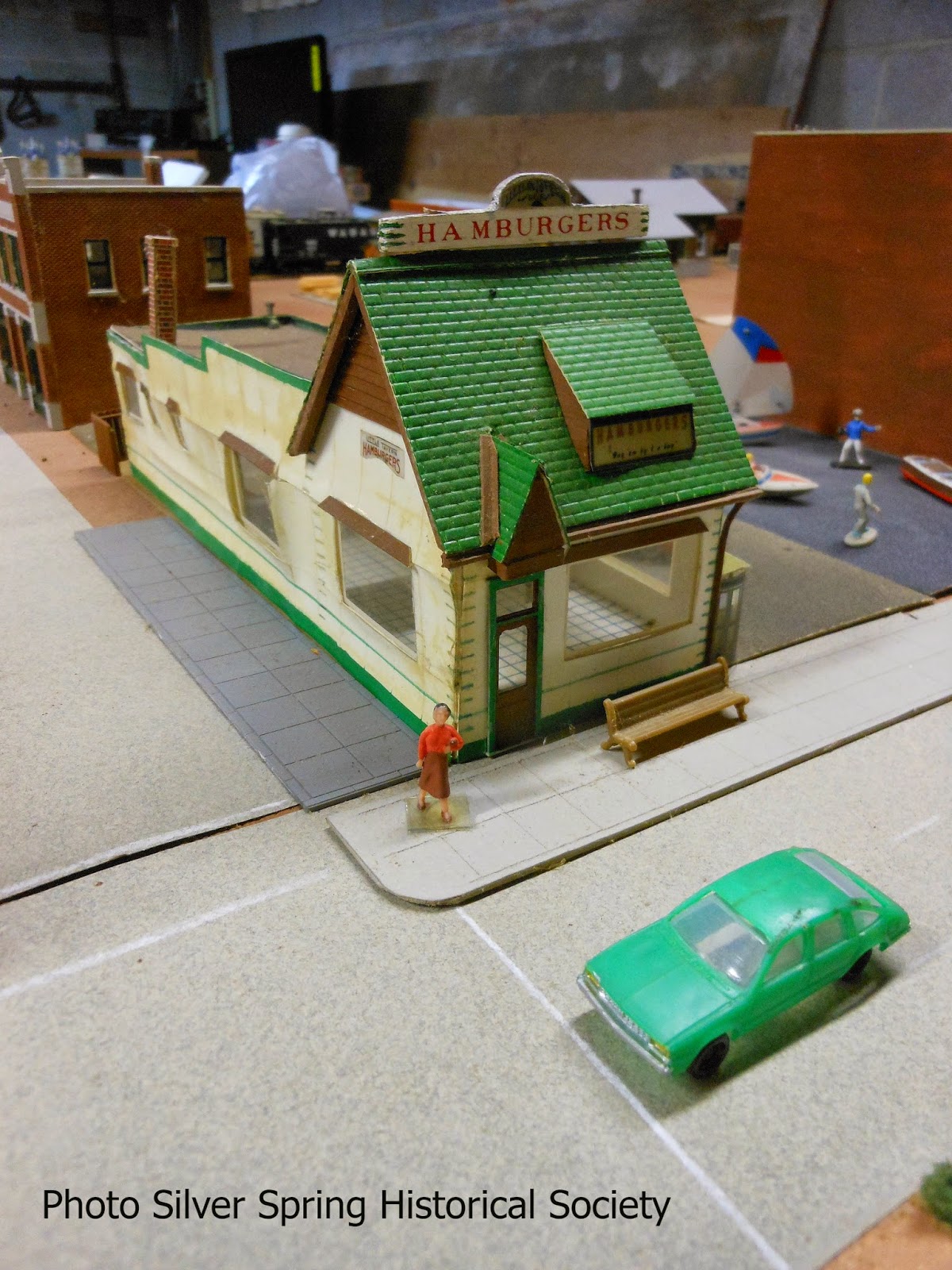 On the northwest corner of Georgia and Ripley sat the equally legendary 1935 Little Tavern Hamburgers, tragically demolished in 2003 by its owner who failed to sell it on eBay (but the gravel footprint of the building is still there). 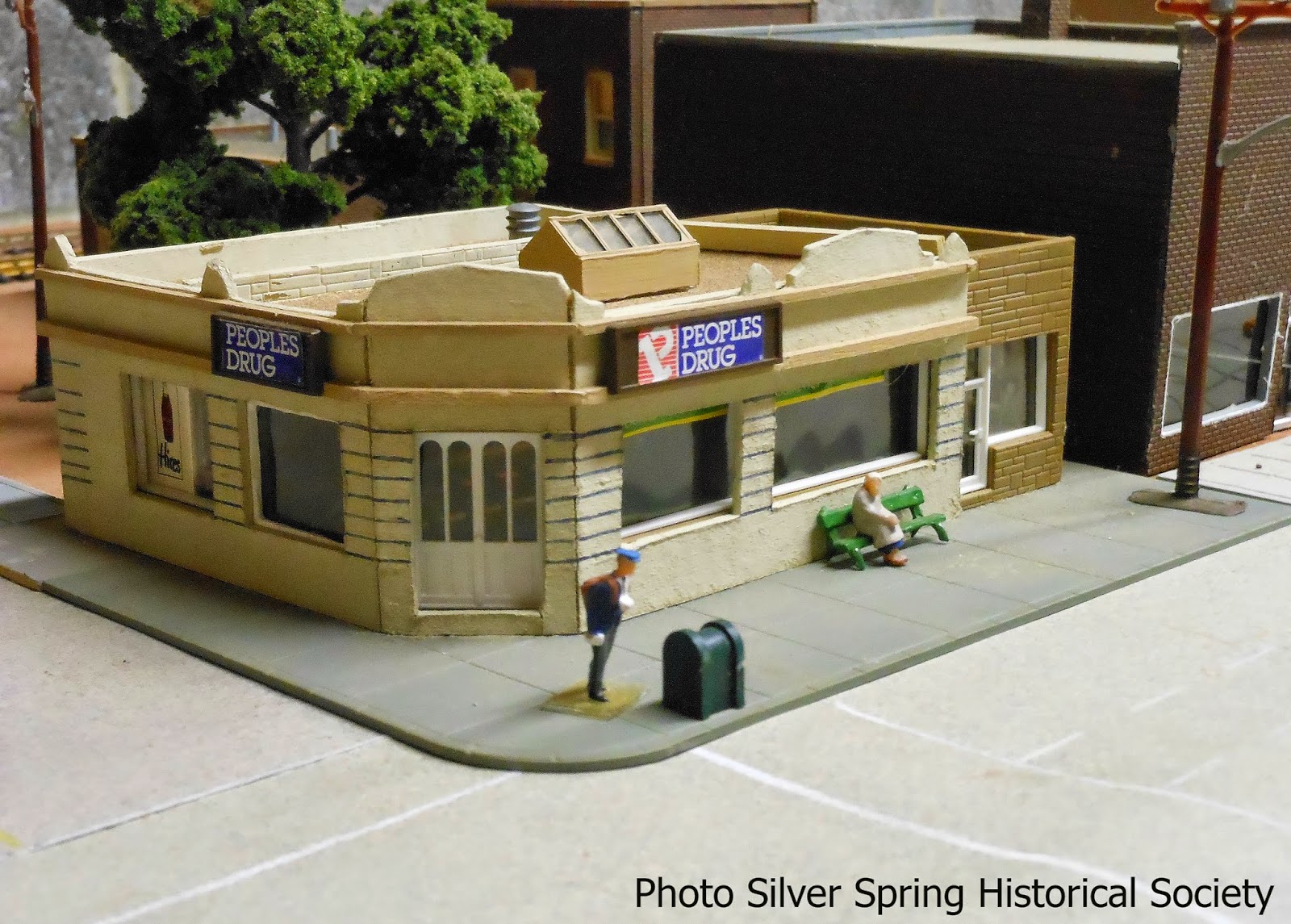 Further up the street is the 1935 Peoples' Drug (today Capital One Bank, 8315 Georgia, who admirably restored and incorporated the facade into new construction in 1996). 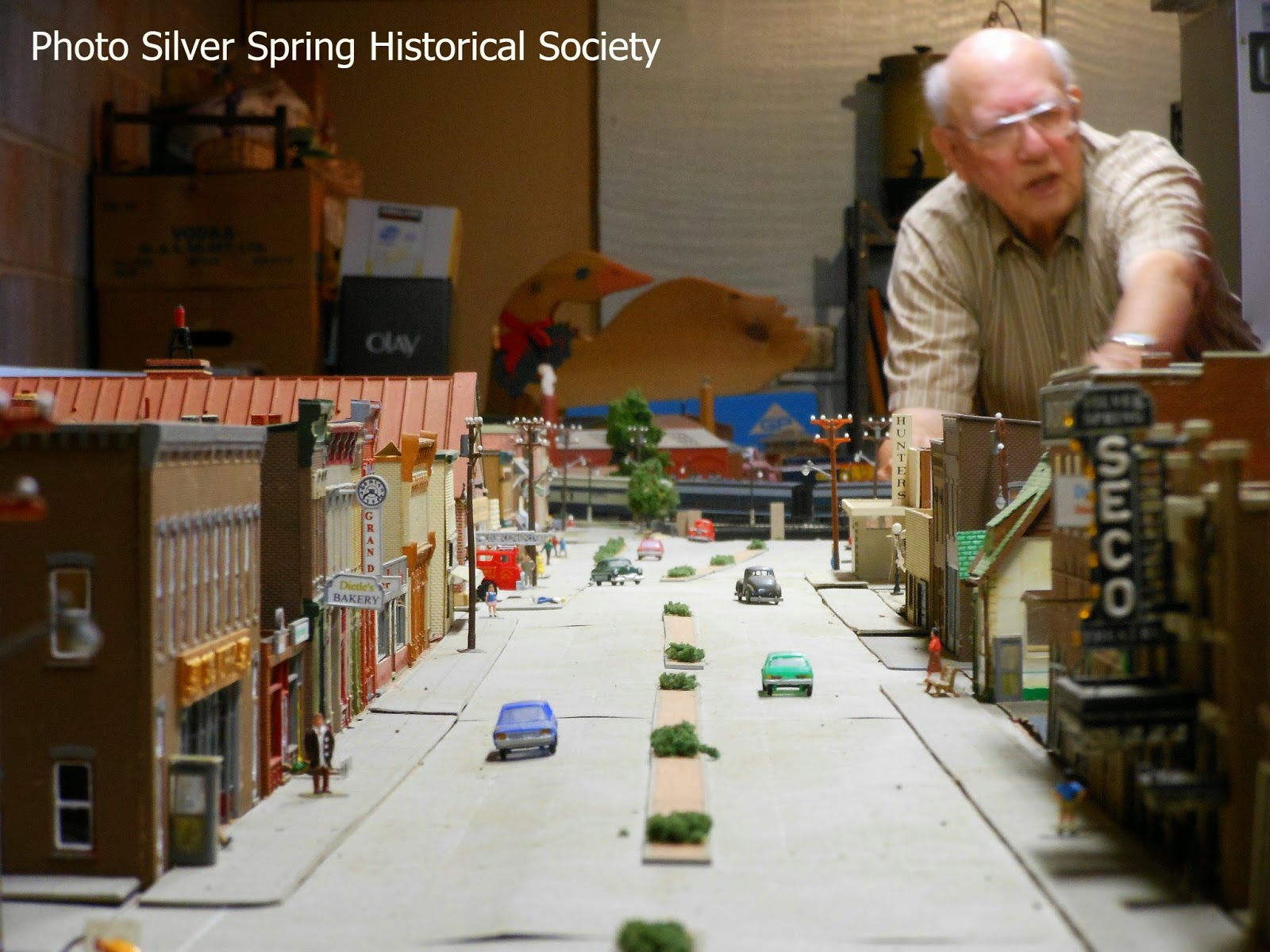 Looking south down Georgia from Thayer Avenue.  Pay no attention to the giant swan or man in the distance. 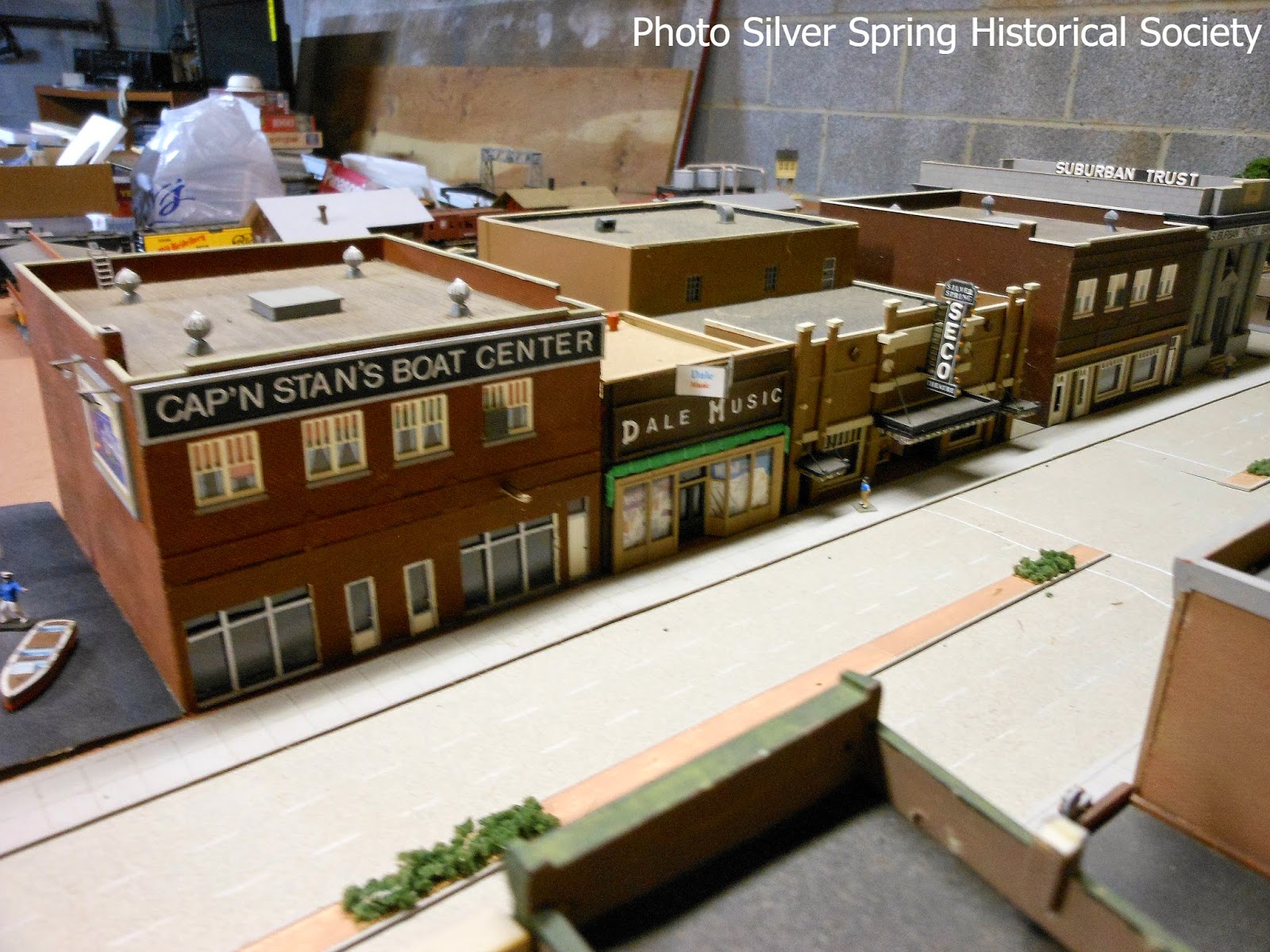 This is the 8200 block of Georgia between Ripley and Bonifant where was located the recently closed Dale Music.  Here was located Silver Spring's first movie theater, the SECO, opened in 1927.  At the end of the block is Silver Spring's oldest bank, Suburban Trust as it was in the 1940s.  All of these structures are extant except for the brown brick building next to the bank, and ALL are scheduled for demolition next year for construction of a singular, glass mixed-use development. 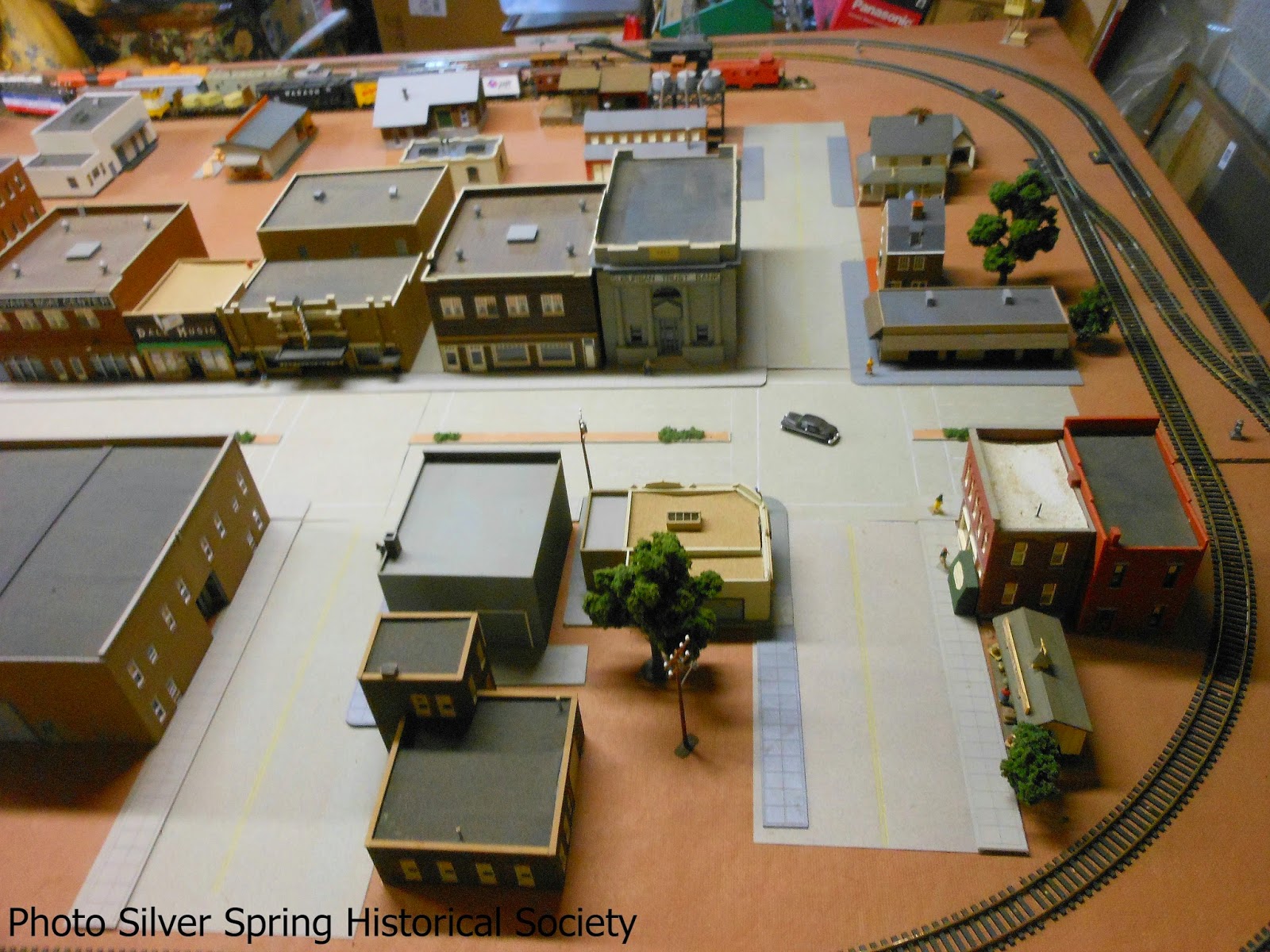 North end of Georgia at Bonifant Street where the model train tracks turn around.

I think you will agree that this is an amazing model train layout that fully displays the love put into it by its creator.  The SSHS is grateful to be entrusted with this heirloom but have a big task ahead of us in disassembling, transporting, and most important of all, storing it for an estimated period of five years.

Future generations will appreciate your help.

Posted by Silver Spring: Then and Again at 11:17 AM

Wow - this is amazing! So many buildings I remember from my childhood in the 60s and 70s.
What a treasure.

I can't imagine how much work went into that. The level of dedication must have been extraordinary.